How Does the Power Grid Work?

Electricity is critical to our daily lives, but how does it get from the power plant to our homes?

The power grid is a complex interconnected system that powers the entire economy by carrying electricity from the source of generation and delivering it to our homes, offices, and factories. Sometimes referred to as “the world’s largest machine”, the grid is an important engineering marvel for the modern economy.

The above infographic from the National Public Utilities Council explains how the power grid works and highlights the three key components that make up the grid.

The grid begins with power plants that generate electricity, typically owned and operated by public, private, or investor-owned utilities.

More than 11,000 power plants comprise the U.S. grid, generating over 4 trillion kilowatt-hours (kWh) of electricity annually. These are fueled by various energy sources:

Each power generation technology has a different role to play in the larger power grid. For example, coal and nuclear power plants that cannot easily adjust their output are known as baseload power plants. Their output remains roughly the same throughout the day, and they are typically used to deliver the minimum amount of power needed to keep the grid running.

On the other hand, power generation from natural gas and intermittent renewable sources like wind and solar fluctuates throughout the day, typically peaking in the evenings when demand is at its highest. Natural gas plants are especially useful in meeting peaks in demand because their output can be adjusted relatively quickly.

After generation, electricity travels from power plants to centers of demand through a process known as transmission.

Transmission lines then carry this high-voltage electricity across long distances and are often interconnected across states. Line voltages can vary from 69,000 volts (69 kV) to 765kV, and transmission lines can be both overhead and underground.

Here’s a map of all high-voltage (345kV or greater) U.S. transmission lines: Upgrading and expanding transmission infrastructure is key to achieving a decarbonized power grid, especially as utilities build solar and wind capacity in the sunniest and windiest parts of the country.

Distribution is the final stage of delivering electricity, making up the last major component of the grid.

Simply put, distribution begins when transmission ends. It is the process of transporting power from the transmission system to individual customers. First, step-down transformers convert the high-voltage power from transmission lines into lower voltages that are suitable for use.

These transformers are connected to distribution poles, which are typically made of wood and used to carry electricity within centers of demand. There are about 180 million distribution poles in the U.S., and it’s likely that you encounter one every day, especially if you live in a city.

Distribution lines and poles deliver electricity to end consumers including households, office buildings, factories, and electric vehicles. Here’s a look at U.S. electricity sales to each end-use sector in 2021:

Heating and cooling are the largest residential electricity uses. In the commercial sector, refrigeration and computers and office equipment account for over a quarter of electricity use. The transportation sector is by far the smallest electricity consumer, but these figures may change as electric vehicle sales rise.

At all times, the amount of electricity sent through the grid must match demand from end-use sectors. This is because all grids operate at a particular frequency (60 hertz in the United States). Excess power supply or demand can destabilize this frequency, potentially damaging grid infrastructure and triggering blackouts.

Just like machines that get old and need greasing, the U.S. power grid is aging and it needs an upgrade, especially as the power sector works to achieve 100% clean electricity by 2035.

To meet the growing demand for electricity, especially from clean energy sources, the U.S. will need to expand its transmission capacity and invest in modernizing the grid. In fact, reaching 100% clean electricity by 2035 could require anywhere from $330 billion to $740 billion in additional power system expenditures, according to a study by NREL.

Ultimately, upgrading and decarbonizing the grid are both pivotal to the U.S.’ climate goals, and this requires action from all stakeholders, from electric utilities to the government and end consumers.

The National Public Utilities Council is a collaborative body of industry experts coming together to solve decarbonization challenges in the power sector and the proud sponsor of the Decarbonization Channel.

Ranked: Emissions per Capita of the Top 30 U.S. Investor-Owned Utilities 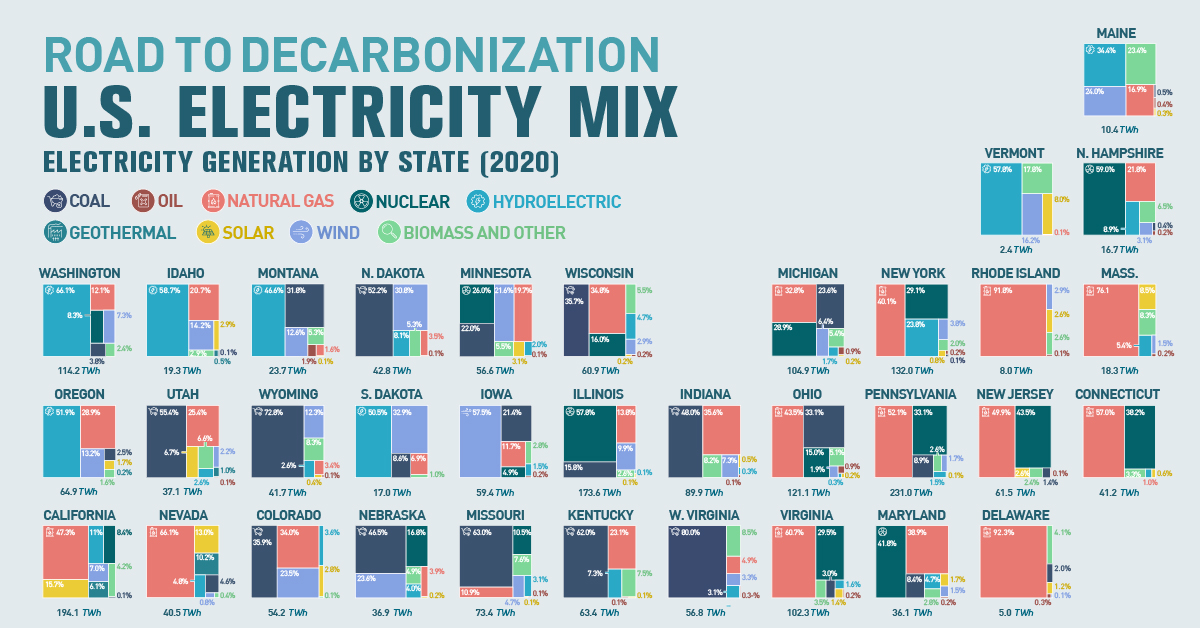 This was originally posted on August 31, 2021, on Visual Capitalist.

The U.S. response to climate change and decarbonization is ramping up, and putting a focus on the country’s electricity mix.

As pressure has increased for near-term and immediate action after the UN’s latest IPCC report on climate change, major economies are starting to make bolder pledges. For the United States, that includes a carbon pollution-free utilities sector by 2035.

But with 50 states and even more territories—each with different energy sources readily available and utilized—some parts of the U.S. are a lot closer to carbon-free electricity than others.

How does each state’s electricity mix compare? This infographic from the National Public Utilities Council highlights the energy sources used for electricity in U.S. states during 2020, using data from the U.S. Energy Information Administration.

How does the United States generate electricity currently?

But on a state-by-state breakdown, we can see just how different the electricity mix is across the country (rounded to the nearest percentage).

At a glance, regional availability of a fuel source and historical use is clear.

For example, coal is the most-used electricity source in West Virginia, Kentucky, and Wyoming, historical coal rich regions and economies.

But for the U.S. to reach its ambitious carbon-free goal by 2035, the biggest impact will need to come from the biggest electricity producers.

That title currently goes to Texas, which generated 12% of total U.S. electricity in 2020. Despite being the most populous state, California generated less than half Texas’ output, and less than both Florida and Pennsylvania.

So although it’s positive that many states in the Pacific Northwest and New England have more plentiful non-fossil fuel electricity, their overall impact on the total U.S. picture is lessened.

Still, more and more states (and countries) are increasing their efforts and ambitions to decarbonize, and that progress makes it easier and more affordable over time. States that might struggle to attain carbon-free electricity, or where costs are too high, face less hurdles as technology improves and subsidies increase.

And with most major U.S. based utilities focusing on improving their ESG reporting and keeping up with decarbonization pledges of their own, the total electricity mix is expected to shift rapidly over the next decade.

National Public Utilities Council is the go-to resource for all things decarbonization in the utilities industry. Learn more. This was originally published on April 25, 2022, on Elements.

But wind doesn’t blow fairly across the nation, so which states are contributing the most to U.S. wind energy generation?

This map uses data from the EIA to show how much wind electricity different U.S. states generate, and breaks down wind’s share of total electricity generation in top wind power producing states.

America’s wind energy generating states are all primarily located in the Central and Midwest regions of the nation, where wind speeds are highest and most consistent.

Texas is the runaway leader in wind, generating over 92 Terawatt-hours of electricity during a year, more than the next three top states (Iowa, Oklahoma, and Kansas) combined. While Texas is the top generator in terms of wind-powered electricity, wind only makes up 20% of the state’s total electricity generation.

The U.S. also has 10 states with no wind power generating facilities, all primarily located in the Southeast region.

How Does Wind Energy Work?

Humans have been harnessing wind power for millennia, with windmills originally relying on wind to pump water or mill flour.

Today’s wind turbines work similarly, with their large blades generating electricity as wind causes them to rotate. As these blades are pushed by the wind, a connected internal shaft that is attached to an electric generator also turns and generates electricity.

Wind power is one of the safest sources of energy and relies on one key factor: wind speeds. When analyzing minimum wind speeds for economic viability in a given location, the following annual average wind speeds are needed:

Unsurprisingly, the majority of America’s onshore wind turbine infrastructure is located in the middle of the nation, where wind speeds are highest.

Record-breaking wind turbine installations in 2020 and 2021, primarily in the Central and Midwest regions, have increased U.S. wind energy generation by 30% to 135.1 GW.

After two years of record-breaking wind turbine installations, 2021’s expiration of the U.S. production tax credit is likely to dampen the rate of future installations.